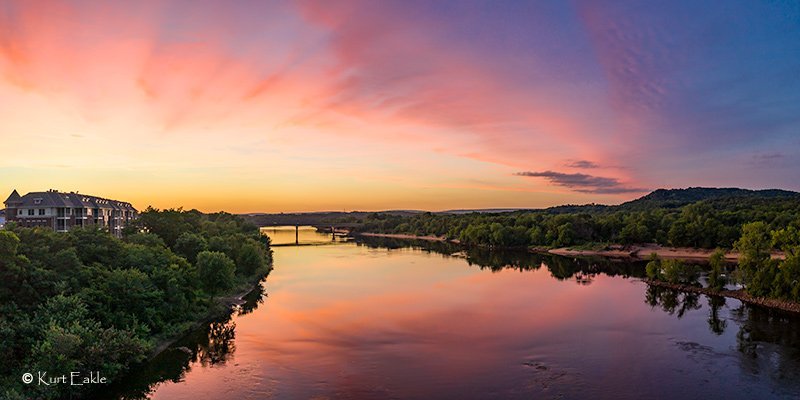 Ever since I was a kid, I’ve loved taking photographs. But I often find that what is in the viewfinder is not really the “picture” that I see. For years, this meant taping photos together–which generally ended up on the refrigerator. Looked nice, but kind of crude. In 2001, I decided to try digital photography and was excited about the ability of software to join single photographs into panoramas. However, the problem remained that if they were printed on my computer printer, they either ended up one to two inches tall on a single sheet of paper or I was back to cutting and tying prints together.

Having a digital camera became my exercise program, and I have enjoyed exploring the natural areas in the Baraboo hills. One time at Pewits Nest, I crawled out on a ledge and got a good series of pictures looking up the length of the slot canyon. These worked out to form a great vertical panorama–again which had to be printed out on three sheets of paper to get a good view. I was excited enough to find a giclee printing service that could print the picture at 10×20 inches I was stunned by the result and entered the print in the Sauk Prairie Wisconsin Regional Artists Program exhibit. The print was awarded a State Exhibit award, and later the James Schwalbach Award for creativity.

I provided prints for the Prairie Enthusiasts traveling photography show in 2006, and fundraisers for the Ferry Bluff Eagle Council, the Sauk Prairie River Projects Association Limited (River PAL), the Wisconsin River Alliance’s calendar, the Wisconsin People and Ideas magazine published by the Wisconsin Academy of Sciences, Arts and Letters, as well as newspapers and local non-profit newsletters. I am currently “re-careering” around my interest in photography. I have my own large format printer and make my own prints. I also do photography and printing for other artists.